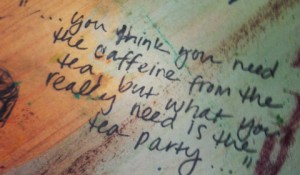 There are a handful of people who have an open invitation to the tea party in my head. I realize I have just given any and all of you permission to submit me to the loony bin, but just give me a second.
These are the people to whom I ask, “What would you do in this situation?” These people and that question have done a lot to form me into who I am today.

First and formost is Jesus. After all, his joy, love, and approval are what I long for more than anyone else’s. So basically, if anything these people do is too stupid or too immoral I laugh and shake my head and take His wiser lead instead.
Second, and hardest to shake, is myself. The combination of genes and environment that caused me to be me will forever be the basis of all else that is Emilie Finke. This is not discouraging to me, mostly because I like myself and find myself to be unequivocally witty, interesting, and generally enjoyable to be around. I hang out with myself every day and never grow tired of it. But every girl needs other go-to girls to look to when faced with certain life things and these beauts are mine:
Liz Lemon: Fictional, I know. But I look to her less for advice and more for hope. I see myself so much in Lizard. She is almost more awkward than I, a little gross, headstrong, talkative, and impulsive, and even though the show (30 Rock) never mentions this outright, I just know she blows off friends for food and Netflix on a regular basis. If Liz Lemon can have a successful job, many different hilarious and handsome boyfriends, and still be endearing and awesome, then so can I…in theory.

Zooey Deschanel: The epitomy of all things quirky, awkward, and cute – this girl is what every naturally awkward/quirky girl hopes to become. Without taking Zoey’s lead and turning those quirks into something adorable, we all run the risk of having lots of cats and cookies with no one to share them with. (Disclaimer: I do not know Zoey, personally. I suppose I am basing all of this off of her character, Jessica Day but I assume them to be exactly the same in every way.) I died my hair darker and started drinking tea again because of her, and I’ll swear before court that I didn’t pick up the ukulele because of her but let’s be real – somewhere deep in my subconcious I totally did.

Serena Van Der Woodsen: I was a cheap date before this girl entered my life. Now, I force expensive classiness into my life whenever I can, and when faced with any potentially classy situation I ask two things: “What would Serena wear?” and “What would Serena drink?” Occasionally I ask, “What would Serena do?” but usually that’s when Jesus steps in with an, “Uh, no.” While her tallness and blondeness are hard to attain, I believe I’ve channelled her attitude, independence, and love for Manhattan. I also prefer to drink things out of martini glasses, including water, milk, and lemonade.

Mindy Kaling: This woman is hilarious and the one I always turn to when enjoying the things pop culture has to offer. For instance, “OMG, do you think John and Katy will stay together because I love both of them but John has such a reputation and so help me if he hurts Katy I swear I will be so furious because she was already so hurt by Russell and I love him too but I had to stop loving him for a couple months after that because let’s face it Katy is such a sweetheart and I just really hope her and John stay together forever and have adorable, musical babies…” She also talks a lot, like she can’t be stopped, like everyone around her gets annoyed at one point or another because they can’t get a word in edgewise and that I relate to completely. She also makes me think it’s okay to be materialistic and selfish and care about things that aren’t really that important, like Katy Perry. Actually, just kidding, Katy Perry is very important. Anyways, Mindy and I should be best friends.

Elizabeth Bennett: She is classy and intelligent yet spunky. She is dainty and womanly with a streak of fierce independence. She does not fill her free time with TV, internet, or iPhones. We’re really nothing alike at all, but I desperately wish we were. First and foremost, I think I would be ten times cooler British.

So those are my women in no particular order. And let’s be real, I totally have Mother Theresa and stuff on there too, okay? Calm down. Also, I realize that the first person on my list is Jesus and he is not a woman. He gets a trump card and gets to stay on the list because he is Jesus.
I thoroughly enjoy my role models and wish the real ones could all come together and get tea outside of my head sometime. I feel like Mindy has a well thought out and definitive opinion of Zooey so I would have to hear that first. We wouldn’t want any unnecessary tension at this tea party. As far as the fictional characters, Tina Fey would be a suitable subsititute for Liz Lemon; however, Blake Lively could not come as Serena. I’ve always been jealous of her and Ryan Reynolds. I could invite a real life Upper Eastside Manhattan socialite, but I would have to meet with her in advance to make sure she was cool, obviously. We wouldn’t want any Blair Waldorf’s sneaking in, if you know what I’m saying. As for Elizabeth Bennett, there is simply no woman on earth like her. She is an unattainable ideal forever lost with the invention of feminism, technology, and pants. The closest I could get, maybe, would be Kate Middleton. She would be a reasonale sit-in for Elizabeth.

Dear women, this is my official invitation to tea. I sincerely hope you can make it. Jesus and I will be waiting.