For instance, while I was growing up, my dad wore these large, horrendous eighties glasses. And when I say large and horrendous, I mean frighteningly similar to the large thick-framed glasses that currently perch on my nose. But his were thin-framed okay?! Totally different. Very horrendous.
But I didn’t care that they were horrendous. When I drew pictures of my dad, the only reason you could possibly know that the ambiguous stick-figure was in fact Greg Finke was because of the massive bug-eyes I passed off as glasses. This was his defining physical trait: big, ugly, outdated glasses. 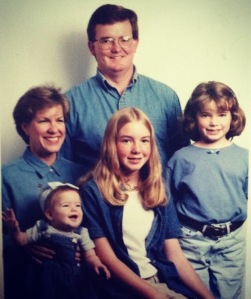 I know, we really committed to the denim thing. Just hush and look at the glasses.

And he had the audacity to change them!

Maybe he didn’t like the fact that his defining physical trait was a pair of huge, hideous glasses. Maybe he wanted to keep up with the ever changing times. Maybe he just needed a fresh start and guys are less inclined to get their hair dyed. Whatever the reason, he went from large and in charge to the tiniest little Ben Franklin glasses you ever did see and frankly, nine year old me was appalled. Appalled. I was raised well so I kept my true reactions to myself until I was alone in the shower. At that time in my life, I still thought showers were soundproof, so my family was often so blessed to hear wonderful belted renditions of the latest CCM or country hit. But that night, in the safety of my supposedly soundproof shower, I cried. So hard. And when I was done crying, dried, and back in my jammies, I walked outside and guess who was standing right outside the bathroom.
“Were you crying in there?” Dad asked.
I erupted into round two of tears but this time I had an audience so it also involved wails and screams and repetitions of, “You’re just trying to be cooooooool!”

Y’all, I was legitimately crushed because my father changed his eye glasses. (Do not fret! This story has a happy ending. His glasses are now completely on point – neither hideously large nor fit for Ben Franklin. He’s found his spectacle sweet spot.) 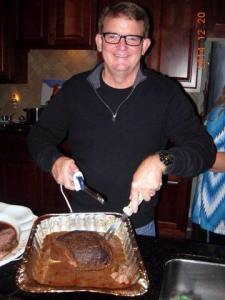 See? Spectacle sweet spot for sure.

However, with this story as my background (yes, don’t worry, my family still won’t let me forget the “you’re just trying to be cooool” incident), you can imagine how I reacted to a cross-country move after living in the same little blue farmhouse for fourteen years. Never mind that I had initially rooted for the move because I was a sucker for adventure and the city sounded enticing. No, no, obviously when I found out significant change was happening, even change I had rooted for, I fell to the floor in a dramatic sweep, sobbed like the emotional teenager I was, and then eloquently wrote in my diary about how much I hated my parents for the next two years.

There are endless examples of small and big change in my life and your life and any life, really. I reacted to 94% of my change horribly. Hopefully you’re better at it than I was. But I think it affected me so horribly because until recently I truly believed, “The more things change, the more things change.”

In the country, in the city, in this quirky in-between place called Knoxville – Jesus is still God.
Living in the same house as my parents, just a skip and a hop away, or much, much too far – my family is still my lifeline.
My hobbies, dreams, and passions ebb and flow – I still want to create and bring joy with and for people and God. I still am called to make disciples of Jesus (often begrudgingly, but that is a blog post for another day.)

There’s freedom in knowing this. Change doesn’t seem so daunting. Change actually makes life more fun, more interesting, more authentic. We were designed to change. We were designed to ebb and flow and grow and transform. No one has to be tethered to one town or job or mindset, because change is necessary and the important things, the heart stuff, won’t change if you tend to them.

What change is coming up in your life that you can embrace instead of fear?

TODAY I WAS SO HAPPY WALKING AROUND IN SUNSHINE AND LISTENING TO THE NEW @johnmarkmcmillan ALBUM THAT I WAS COMPEEELLED TO TAKE A PIC OF THE PERF MOMENT. (You can’t argue with people who use the word “compel.”) | Swipe for lyrical lettering.
Whether we’re talking The Office or Tennessee weather, I don’t mind experiencing a few seasons a week. I don’t mind it at all.
Thankful for Fridays, breakfasts, open doors, snow flurries, and good conversations. Also for friends who like to cook and do so for me😉
One year of me showering Ralph with cuddles and him wondering when Tyler will get home😽