I don’t have extraordinarily fond memories of Cades Cove.
Cades Cove is an area in the Smokey Mountains with camping and hiking and most notably an 11 mile “scenic loop.” Sounds nice, right? I thought so too. I took my sister and brother-in-law there over my very first Tennessee Christmas break to show them the mountains, get some hiking in, maybe see a bear, all for well thought out reason of, well, I had heard of it.
Apparently, so had everyone else in all of America. .
I kid you not, we spent no less than eighty million hours stuck in traffic on that dang loop, saw not one bit of wildlife, and didn’t have time to do any hiking by the time we got through it because the sun had literally set.

My face if you had previously asked me my opinion of Cades Cove. No.

I gave it another shot last weekend because I like hiking and I like people and people were going hiking in Cades Cove.

We pulled off the scenic loop (with no traffic, I might add) about halfway through to find the trailhead to Abram’s Falls. It was still a pretty crowded hike, but that’s inevitable in popular Smokey locations and you know what? It was still breathtaking.

It was depressingly warm for October in the mountains, but the first signs of autumn were peeking out here and there anyway – sweet trees sprinkled throughout the mountains who squeezed out bits of fire for us despite their luscious green contemporaries surrounding them. I’ve dubbed this season “Fallmost” because we basic white girls want it to be fall so desperately, a scattering of trees feel the same way, and, in our defense, it is in the middle of October. It should be fall. But the warm temps combined with loads of stubborn green trees have made it so that I cannot call this season “Fall” in good conscience. This year, we don’t get fall. We get fallmost. 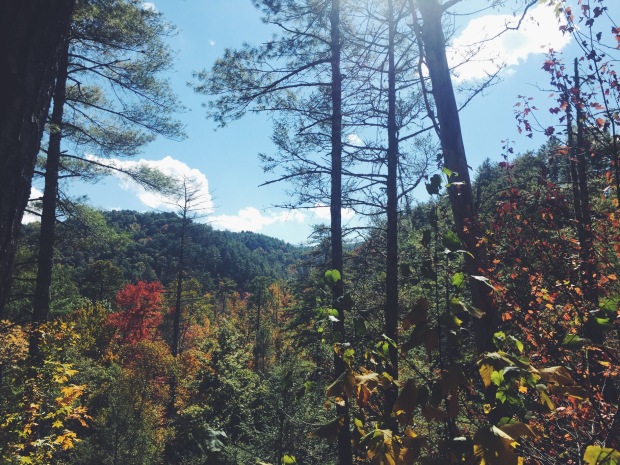 There is a rocky peak about halfway through the trail to Abram’s Falls which you can easily scurry up for stunning views and to catch a glimpse of the hero trees shining their firey red leaves for you to drool over. If I’m being honest, next time I do this trail, I may just pack a lunch, pop a squat, and spend my time at that halfway point.
The falls were pretty. They were. But they were relatively small, quite crowded, and, most importantly, downright mesmerizing. We sat near the waterfall (because hiking back wet from swimming sounds like the absolute most horrible thing in all of the world) and simply stared. The sound of the river falling over the rocks and into the pool below very nearly put me to sleep. 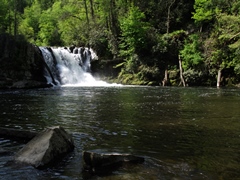 You know what most people don’t want to do after a very effective lullaby?
Hike.

Abram’s Falls hike is uphill and downhill both ways. The trail is rocky and full of tree roots. It is not an especially difficult hike by any means, but you have to be paying attention, and you will be working equally hard both ways, which means you can’t go into a trancelike meditation state in the middle. Whoops. So while the falls were lovely, and I’m glad I saw them, if you don’t have loads of time or energy, hang out on the mid-way peak. It’s much more impressive. 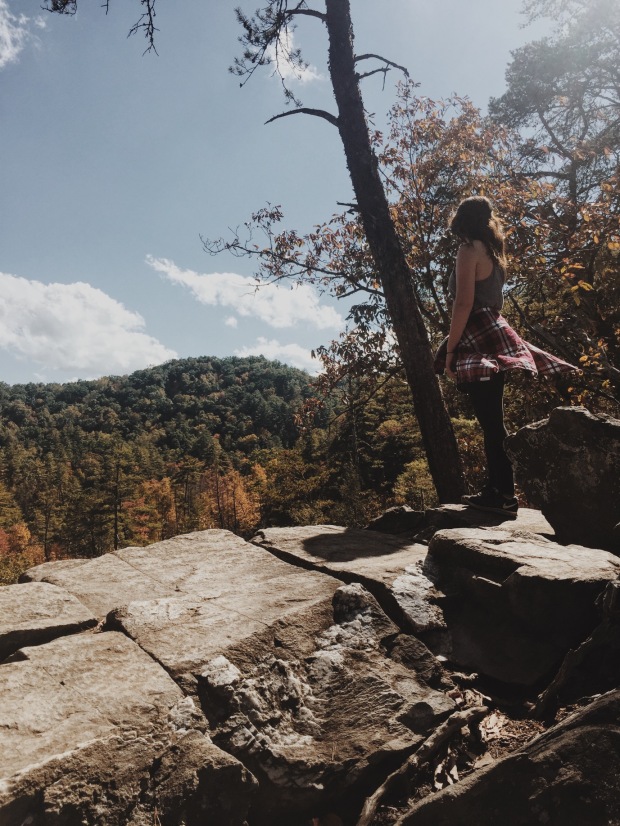 Abram’s Falls was fine. Abram’s Falls hike was fantastic. However, based on how many times I tripped on tree roots and rocks, I wouldn’t suggest bringing anything valuable (like a newborn baby, I kid you not.) If I tripped approximately a hundred times, a normal human would still trip at least twenty.
I digress.